Written by Ulrica Bladh
Thousand young managers (#1000nuortajohtajaa) is a nationwide campaign by the Junior Chamber International Finland and Chamber of Commerce that brings leaders and young people together. The campaign took place from 13th to 17th of November, and on 14th of November Bluet got Ulrica as a young manager for one day. Here’s Ulrica’s thoughts about the day at Bluet Ltd:

I got the chance to visit Tytti Sirola’s work through a thousand young leaders (#1000nuortayrittajaa) campaign. The morning began with a meeting with Finnish Water Forum’s operational committee. The topic of the discussion was the development of the FWF and other future plans they had. It was interesting to see how the meeting progressed and the participants made decisions together.

After the FWF meeting, the trip continued to Bluet’s office. Sirola told me that the staff composition for this day was a bit smaller than usual, but that didn’t trouble me at all. Through Kimmo Saharinen I got acquainted with engineering jobs that I find very interesting. The topic was to calculate cost estimates using the Excel spreadsheet program. However, it is not Saharinen’s only task at Bluet, cause the engineering work is really versatile.
Also Tytti Sirola’s work is very versatile. With the team being very small and close, leadership is a very flexible concept. Co-operation in the team, especially between Saharinen and Sirola, is strong and effective. I believe that a good leader must be cooperative, but he must be able to make decisions independently on behalf of the company. We discussed about the leadership with Sirola and she thinks that leadership through examples is important. It shines through of her way of working. How can you require others to be fully involved if you are not ready for the same? For her, in the leadership, the most rewarding success is the success of the entire team.

Everyone’s career path is not always quite straight. Few will end up doing the same thing they thought they would be doing for the rest of their lives. You might hit few bumbs on the way, but you shouldn’t be afraid. Many times the fate takes the lead. After talking with Sirola, I found out that that the same thing had happened to her as well. Not getting into the school you wanted to get to doesn’t necessarily mean that you can’t make your dreams come to reality, or that you couldn’t be succesfull on your career. It’s a relieve to hear that you don’t have to be sure about your future and profession. Things are going to clarify over time.
The lessons of the day can be summarized in one sentence: The one who dares, wins.

Korkeasaari Zoo, located in front of Helsinki, is one of the oldest zoos in the world and attracts about half… 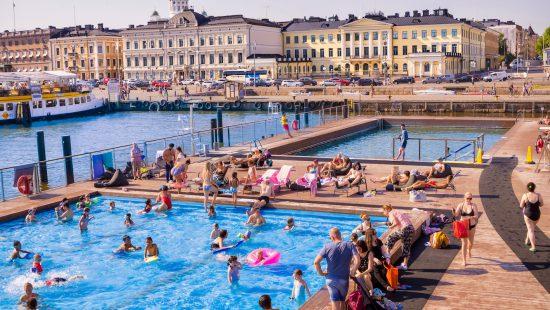 The Allas Sea Pool marine spa, opened next to the Market Square in Helsinki in the autumn of 2016, has…

Bluet Oy Ltd is a Finnish company, specializing in floating construction solutions. It was founded in June 2016 by managing…